Don't miss to learn how to play to the game first!

Check the release notes to discover the new features!

Please zoom-in back to the initial state

Please zoom-out back to the initial state

Merge White tiles together to get a BIGGER tile.

Do the HIGHEST score & get the BIGGEST tile!

First, you can display this tutorial or watch the video trailer below to have a quick preview of the game.

You must mix together the 3 primary colors (red, green & bluecyan, magenta & yellowred, yellow & blue) in order to get a « numbered » tile (whiteblack) with weight 1.

Once you get 2 numbered tiles side by side, you can also merge them together in order to get a bigger numbered tile (with a bigger weight, addition of the two merges ones), save some space on the game grid, and then get a new random primary color to mix.

The final goal is to reach the highest score and get the biggest numbered tile!

Mixing & merging tiles give you some points.
Some bonus points are also added when you achieve special moves (like consecutively merging numbered tiles or achieve a « snake merge »).

> See the LEGEND screen for more informations about scoring.

You can only mix or merge tiles that are side by side, in one of the 4 directions (top, right, bottom & left / no diagonals).

Of course you can only mix or merge tiles that are compatible with each other: 2 primary colors, 1 primary color with its complementary, 2 numbered tiles.

To mix or merge tiles, just click/tap on a tile (source) and slide it to another compatible tile (target). Then release it, and it will merge with the target tile.

If you bring a source tile above an incompatible target tile, nothing happens and the source tile will come back to its initial position.

When you START A NEW GAME, you can choose several options to customize the game mechanisms.

You can access to several GAME STATISTICS by clicking on the scores at the top of the game grid.

At any time, you can CONFIGURE SOME SETTINGS, to customize the game appearance: this is just a matter of taste!!

Choose to display the whole game with the LIGHT theme based on light gray & blue (great for the daylight), or the DARK one based on dark gray & orange (better for the night).

Choose the shape of the tiles on the game grid: SQUARE, ROUNDED or ROUND.

Display the colors with their ORIGINAL values, as defined in the color models, or choose to make them SMOOTHER to have less agressive colors and save your vision.

I'm working as a web developer, and I like that. So much that I also spent a part of my hobbies time to create websites and bring some of my obsessions ideas to life!

For example, I created years ago the TooLiPHoNe.NeT website to provide some "webapps" (iEmpty, iCustom & iSkin) to customize an iOS device without jailbreak.

Well, that's very interesting, but I guess that's all you wish to know about myself!

HOW came this idea?

I had the idea of creating this game some years ago, in 2014. This was the year when the 2048 game by Gabriele Cirulli conquered the world!

I played a lot to this addictive game, but the thing that I loved while playing it was telling to myself: « Hey! That's something I can do, and that should be very fun to create a little puzzle game like that using only some HTML, Javascript ans CSS! »

So I started thinking about a 2048 derivative, like there were dozens created after it. And I ended with a slightly different game concept in my mind: « What about mixing some colors instead of merging numbers ? ».

There are 3 primary colors to mix, and I thought there were something nice to do with it: The idea for my game was born, with all the basic principles in my mind!

I kept the grid layout with tiles, and the principle of merging them together. But the game mechanisms are new and very different than a 2048-clone at the end!

In all cases, a big thank to Gabriele Cirulli for inspiring me with its 2048 game creation!

WHEN was it crafted?

Then, I had to wait for 4 long years to make this idea come to reality. By lack of time mainly (my family & my work obviously goes first). But it was still here, in a corner of my mind, waiting for the right moment...

This moment came in early 2018 (January), when I had more time and some motivation to start a new web project. So I started making it during my free time.

The game basis was coded in a few dozen hours (but it was ugly, just a « proof of concept »). Many more dozens were needed to have a « polished final product » !

Finding the name was not the easiest thing... but one of the more exciting!

This is a moment I like before starting a new development project: find a name first, then a domain URL to host it and craft a logo before starting to create something from an idea. This gives me the motivation I need to go to the end!

I was looking for a short and "strong" name that everybody can understand and remember easily. And also a free domain name that latch with it of course!

That's why I focused on the .io domain extension: I think it has a certain "cool factor", it is already used by some online games (like the famous agar.io game), and there are more available domain names than with a .com or a .net.

Then I tried many things around the concept of "colors", as it is the identity of my puzzle game. But I found nothing that really sounds good... So I tried to see how to translate "color" or "colors" in some ancient languages, like latin or greek. Not better...

Finally, I saw that Google Translate can translate in Esperanto : What a better language to be "universal"?!? The translation of the « color » word gave me the « koloro » result: BINGO! I like that!! This is strong and simple, and very "graphical" with the "o" letter every 2 letters : koloro.io.

That was a lot of fun for me to create that game, think about the game mechanisms, the right balance for scoring, making the logos and the game design...

First, mix all 3 primary colors together to get a numbered tile with weight 1.

New colors will randomly "pop" on the game grid.

Then, merge the numbered tiles together to get a bigger tile and save some space on the game grid for new colors.

You can get great bonus points by achieving consecutive or "snake" merges!

The game ends when you can't achieve any additional move.

Your goal is to reach the highest score and get the biggest numbered tile.

You can play it in easy level (with some hints to help you) or in normal one.

You can also change the grid size for different game experiences!

At any time, you can customize the game appearance, like the color model to use, the tiles shape, or activate the "dark" mode. 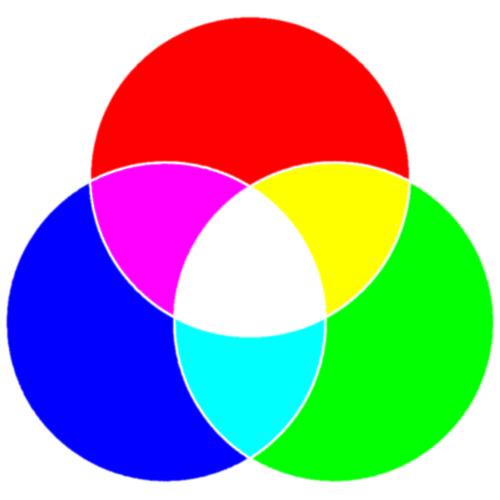 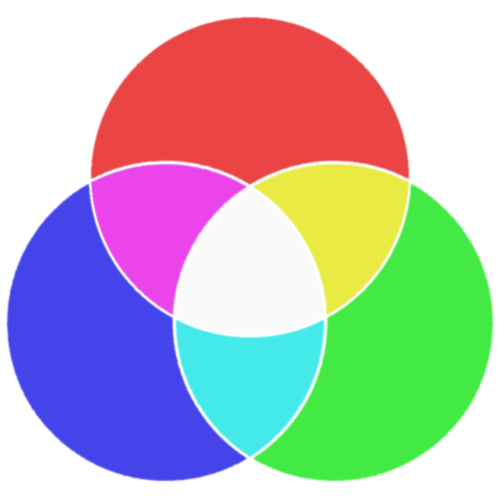 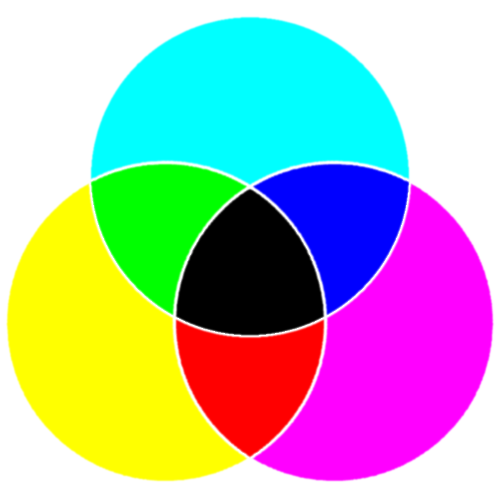 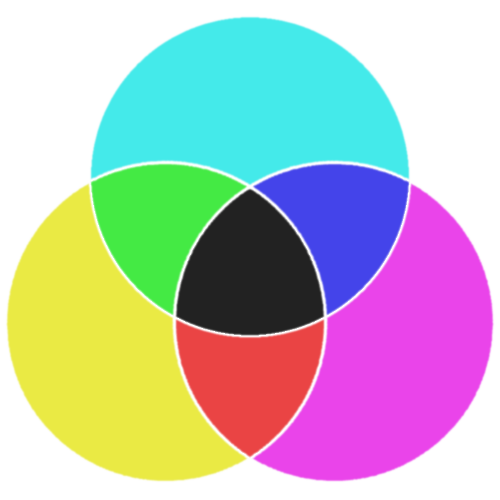 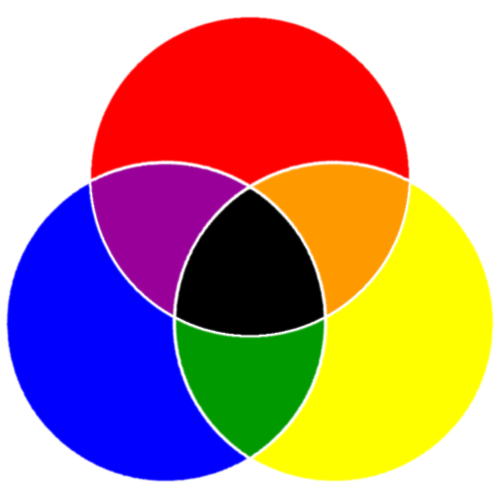 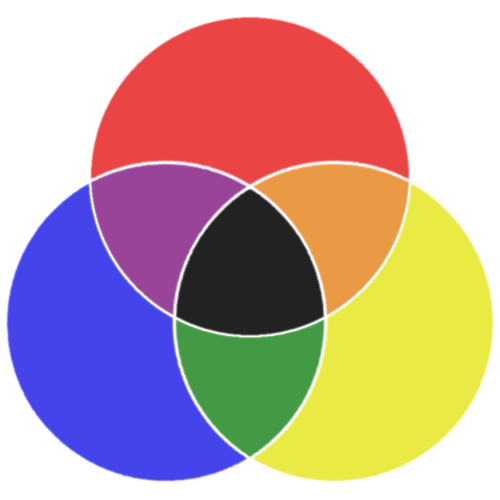 Mix two primary colors together to get a secondary color.

Mix a primary color with its complementary secondary color to get the whiteblack numbered tile (weight 1).

Merge two numbered tiles together to get a new numbered tile with a bigger weight and save space on the game grid.

It is better to merge the biggest tile into the smallest one to get more points!

Achieve some special moves to get extra bonus points!

Bonus points will be added to your current score at the end of the "combo" session, when you stop merging numbered tiles together...

The order of the merged tiles is not important.

Merge numbered tiles together in order to achieve a "snake" (the source tile of a merge is the target tile of the previous merge).

This is a variant of the CONSECUTIVE merge where the merge order is important.

Do the LONGEST snake to get more points, as the longest snake length achieved during the combo session will be a MULTIPLIER of the consecutive merge bonus points!

Thanks for sharing koloro with the world!

Just want to say « hello » or give me a feedback?

Alternatively, you can send me an email:

I'll read all your messages and do my best to answer them
(but I can't promise that!)

You'll find here th history of all released versions, and the features I plan to develop next.

It seems that Local Storage in not supported or enabled by your browser!

Please enable it in your browser settings (and avoid private mode).